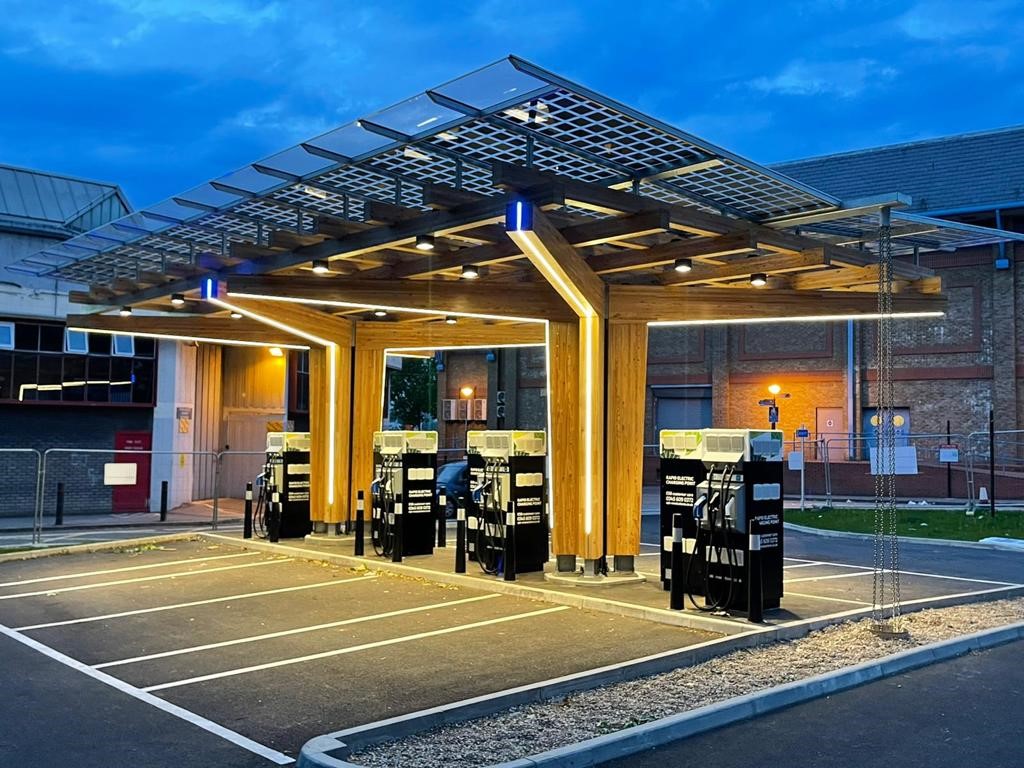 More than 7,000 charge points supporting drivers to choose the cleanest vehicles ahead of ULEZ expansion in October

TfL has opened a new rapid charging hub at Glass Yard in Woolwich. The 'petrol station' for electric vehicles allows drivers to charge up in 20-30 minutes and with eight charging points, it means a space is more likely to be available.

The facility in south London is part of TfL's strategy to have a rapid charging hub in every one of the capital's five sub-regions. The first was in east London at Stratford International and a site at Baynard House in the City of London, the central location, is currently being constructed. More will follow in the north and west.

London leads the way in the UK with around a third of the country's charging points. Giving drivers certainty that they will have a place to plug in is key to helping people switch to electric vehicles.

Last year, TfL hit its target of delivering 300 rapid charging points across the capital. This faster way to power up is particularly important in supporting commercial drivers, such as taxis, private hire and van drivers, to make the green transition.

Londoners need a range of options when charging their vehicle as part of the move to net zero. In partnership with the city's 33 boroughs through the Go Ultra Low Cities scheme more than 3,000 residential charging points have already been delivered. The points allow drivers to plug their vehicle in overnight and return to it fully charged in the morning.

There are now more than 7,000 charging points within the M25, an increase of more than 2,000 over the last year. Some are dedicated specifically to more than 4,300 zero emission capable black cabs taking fares from Heathrow to Hornchurch.

Taxi drivers have also been able to access up to £10,000 to take dirty diesels off the road and through the Office of Low Emission Vehicles are being given a grant of £3,500 to go electric.

On 25 October, the Ultra Low Emission Zone (ULEZ) will expand up to but not including the North and South Circular roads. The expanded ULEZ is 18 times the current zone and it is expected it will contribute to a fall of harmful nitrogen dioxide of around 30% across the whole of London.

The Glass Yard hub is conveniently located on the edge of the boundary. Ahead of the zone covering a larger area, the Mayor has encouraged people to do away with older, polluting vans, cars, motorcycles and heavy vehicles with a £60 million scrappage scheme. This has already seen more than 11,000 retrofitted or put beyond use.

While the charging infrastructure installed more than meets demand for now, a huge rise in demand is expected over the next few years as the take up of electric vehicles increases.

The Mayor's Electric Vehicle Infrastructure Delivery Plan estimates that by 2025, London may need up to 4,000 rapid charging points and up to 48,000 residential chargers as more and more people and businesses move to electric vehicles.

A new strategy will be published later this year, addressing future forecasts. It will include analysis of long-term demand, further information on how the Greater London Authority land can be used to ramp up the density of charging points and how the public and private sector can remove barriers to their construction.

Alex Williams, TfL's Director of City Planning, said: 'It's essential that we increase the supply of charging infrastructure for electric vehicles as we support the shift to these vehicles to clean up London's air and decarbonise transport in the city.

'We have seen an increase of more than 2,000 charging points in the capital over the last year and these new hubs are a key part of that expansion.

'Electric vehicle charging hubs that can be used in the same way as a traditional petrol station but without pumping toxic fumes are important in helping people to feel comfortable taking the plunge with an electric vehicle.

'The state-of-the art facility at Glass Yard gives people confidence that they will have a charge point available when they arrive and not have to wait long until they are fully powered up.

'These hubs will be spread across the capital and complement the dense charging network we already have, meaning range anxiety is not something drivers have to worry about in London.

'We know there is going to be huge growth in the number of electric vehicles over the next few years. The Electric Vehicle Infrastructure Strategy published in the next few months will set out in detail how we will cater for this demand.'

The Mayor of London, Sadiq Khan, said: 'I'm delighted that TfL has opened a new rapid charging hub in south London, the second of five rapid charging hubs Londoners will soon be able to make use of around the capital.

'There are now over 7,000 charge points available to support electric vehicle use in the city and it's great to see London leading the way in the green vehicle revolution.

'Petrol and diesel vehicles are major contributors to air pollution in London so it is essential that we make it as easy as possible for people to swap their cars, vans and motorcycles to greener, electric versions.

'In October, I am expanding the Ultra Low Emission Zone up to the North and South Circular roads, which will bring huge benefits to many more Londoners by helping to improve our filthy air.

'We are facing a climate emergency and, as the UK prepares to host the COP 26 climate conference later this year, it has never been more important to encourage people, organisations and businesses to make the change to zero emission vehicles to support my aim for London to become net zero carbon by 2030.'

John Byrne, Head of ESB EV Solutions, said: 'At ESB Energy, we are committed to investing in low carbon energy solutions across the UK. We're delighted this new flagship charging facility at Glass Yard in Woolwich is now open.

'Our strong partnership with TfL has been crucial in allowing us to develop this facility and we are delighted to be in a position to provide further rapid charging services for electric vehicles across the London area.

'With a growing network of over 150 rapid chargers in London, Coventry and Birmingham, we see the huge benefit that EV infrastructure plays in helping to build a sustainable future for cities.'

Wilke Reints, Managing Director, Intelligent Traffic Systems, Siemens Mobility Limited, said: 'As the ownership and use of electric vehicles continues to grow rapidly, projects such as Glass Yard are hugely important in building drivers' confidence in the charging network and encouraging people to switch to cleaner modes of transport.

'The ongoing investment in EV infrastructure, and the expansion of the ULEZ later this year, will help clean up the air Londoner's breathe and we're proud to help deliver this hub in Woolwich as well as the expanded zone.

'The new innovative and sustainable charging hub provides accessible, efficient and reliable charging for Londoners and visitors to the city and I'm excited to see people using it from today.'

When autocomplete results are available use up and down arrows to review and enter to select.